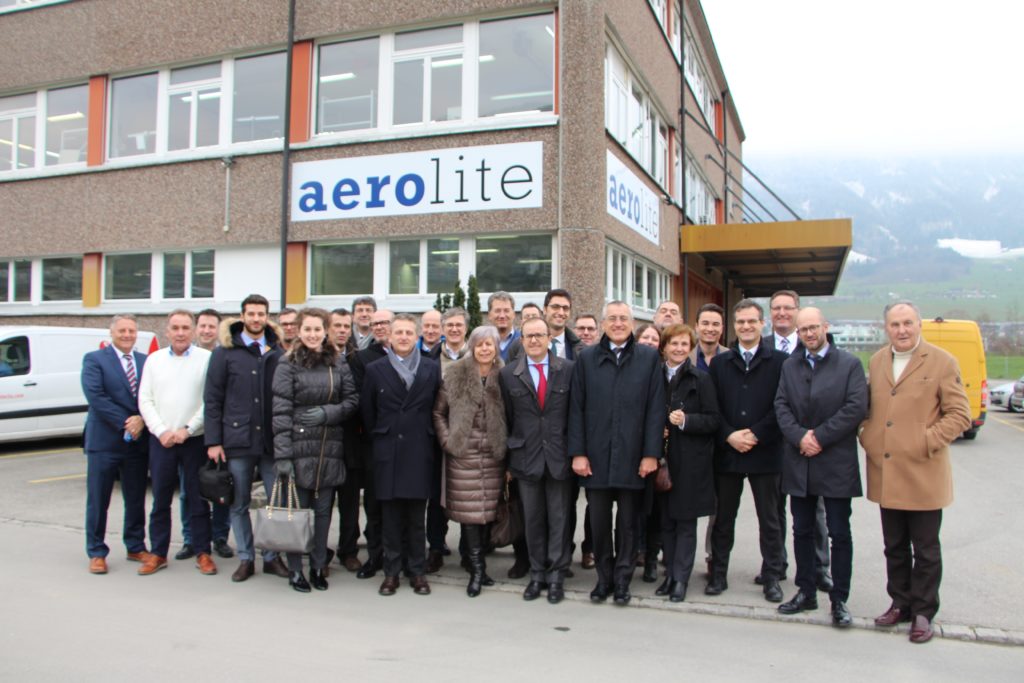 The purpose of this meeting is to share information on how the Lombardian Cluster operates. But also understand what are the possibilities of working together

So Roland Hengartner, President of the Swiss Aerospace Cluster launches the first Cluster2Cluster event, organized by the Lombardia Aerospace Cluster with the aim of helping SMEs to develop European contacts with companies of the same size, medium and short distance. The frame of the pilot mission was Switzerland, more precisely the Nidwalden caton, where 22 entrepreneurs met, tightening relations between two neighboring territories and laying the foundations for future collaborations.

We wonder what we can produce in Italy, or if there are projects that we can carry forward together – continues Hengartner – The goal is to start relations between the Swiss Aerospace Cluster and the Lombardian one. Until now there was no contact between the two realities, this means that the time has come to discuss and, why not, define a sort of agreement on the possibilities of future business.

But in practice what is a Cluster2Cluster event? This is a project coordinated by the Lombardian Aerospace Cluster Councilor Massimo Maronati, which aims at Business Networking with neighboring Cluster companies. An one-day appointment to ‘kilometer zero’, with transport by bus to strengthen the identity of Cluster. The agenda of the event, once in place, includes introductions by both clusters, followed by presentations of 3 minutes of the entrepreneurs presented: core business company, areas of interest, search for partners and projects in progress.

The result is mutual knowledge, a catalog of contacts that can be activated immediately, the construction of new partnerships and targeted social communication

explains Paola Margnini, Cluster Manager of the Cluster that represents the Lombardian aerospace companies, presented at the Swiss meeting. Giving entrepreneurs the opportunity to meet face-to-face companies similar to their own, but also competitors, to build and grow a network, open the mind and share knowledge: this is the aim of the initiative proposed by Lombardia Aerospace Cluster to companies.

Watch the interviews to Swiss and Lombardian Cluster responsibles

But why was Switzerland chosen as the first destination of this business networking project? It is not just a matter of geographical proximity. The answer lies also in the numbers related to international trade.

The commercial exchange between the two realities

In the first nine months of 2017, the trade balance between aircraft imports and exports between Lombardia and Switzerland rose by 151%, compared to the same period of 2016. Turning from +3.332.674 to +15.810.575 million euros. In the same period the province of Varese alone recorded a + 168%, starting from a slight decrease in trade balance for 2016 (-78.436 thousand euros) and thus reaching the threshold of +6.932.268 euros. The merit of this growth is attributable to the good performance of exports, almost tripled both in Lombardia (for an absolute value of over 27.6 million euros), and at the level of province of Varese (17.6 million euros). Even more surprising results if compared to the national data, which between January and September 2017 saw the increase of the “only” export variation of 49%, compared to the previous year. In practice, made 100 Italian aerospace exports to Switzerland, Lombardia cuts out a share of the national total of 56%.

Business opportunities between Lombardia and Switzerland

In short, the business opportunities between Lombardia and Switzerland are much more than a project, but a concrete reality to be implemented. As stated by Massimo Maronati, CEO of E-level Communication Srl:

The objective of the mission was to experience a direct meeting between entrepreneurs from two neighboring Clusters. We had a good success, we met many entrepreneurs interested in collaborations and also among Italian entrepreneurs there was a good amalgamation, dialogue and the search for opportunities for collaboration. Good business opportunities have emerged, as we have seen the existence of potential partners operating on the Swiss market: real international operators, with offices also in the United States and Spain. Reality with which we have started the first contacts for the subsequent in-depth events, which have already been agreed.

An experience full of ideas also for Massimo Buffetto, Area Manager of Aviometal Spa, who expects

further developments from this first contact. We hope to continue this work of internationalization with other similar initiatives.

For Ivano Soliani, CEO of Soliani Emc Srl, however

the ease with which we arrive at a B2B meeting with similar initiatives is really interesting, because it allows you to get in direct contact with the most operative exponents of companies. So there is a gain of time also due to a greater ability to understand each other. Sharing knowledge at the level of international clusters leads to greater consideration of what we have in Italy at the level of small and medium enterprises. 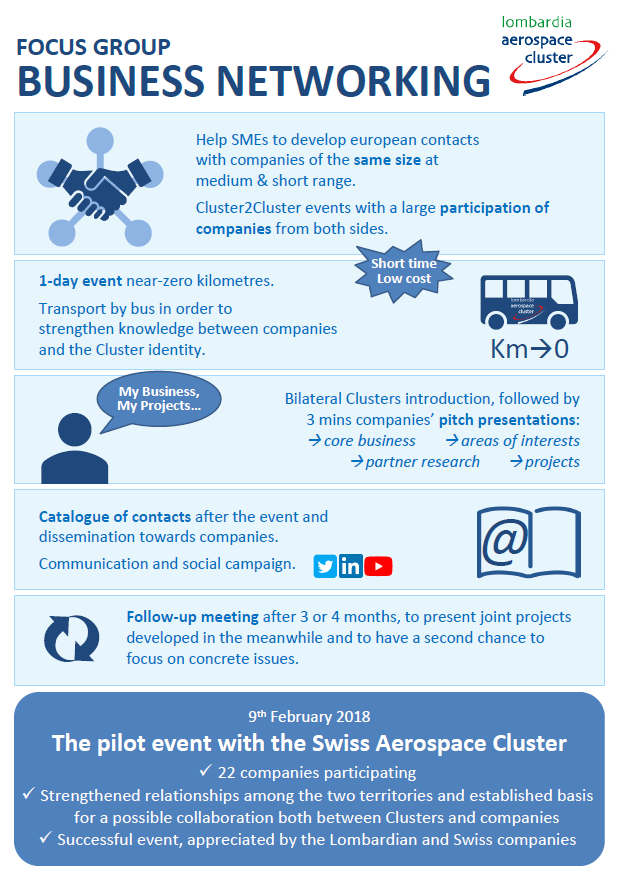